In football history, it is the story of the victors which is glorified, while the defeated is, at best, forgotten. Ghana is never bereft of talented footballers. Since the nascence of football, a lot of footballers have in a way or the other etched their names in the country’s football folklore. Names like Mohammed Polo, Peter Lamptey, Samuel Osei Kuffour, Stephen Appiah, Michael Essien, Sulley Muntari, and Asamoah Gyan are just a few of the many who have contributed to the development of the sport in the country.

One player who stands tall among the new wave of emerging talents highly tipped to take Ghanaian football by storm is Accra Hearts of Oak’s Larry Sumaila Ibrahim. The versatile youngster’s fledgling displays already indicate he could one day attain such status.

As a child, the 18-year-old born in Madina Zongo (a suburb of Accra) was seen glued to the television set watching football, kicking imaginary balls in the living room, cheering himself as if he was one of the thousands of imaginary supporters from the sidelines. Fast forward to today, kids play has become a reality, in a way that has superseded all dreams. “I chose to be a footballer and thus have no option than to work hard if I’m to achieve as an athlete.” He told kickgh.com in an interview.

At a tender age, he was so engrossed to football to the point that it disturbed his parents. The Zurak Park at Madina became the theatre of his first marauding runs, the ball already glued to his right foot.

His mother was very protective of her eldest son though, and tried to steer the young Ibrahim towards formal education to help him avoid any football related injury. His dad saw much more in him, and convinced Larry’s mother to allow their son to stick and commit to both education and Football at the same time.  Her leniency stretched to letting the young boy join Top Ten Academy, a colts club in his locality.

Stints with Vision FC and Narita FC in Ghana and a trial with Greek club PAOK were to follow next. Officials of PAOK were impressed with his talent and had loved to sign the young Ghanaian on, but a contractual disagreement between the club and the player’s agent ensured the deal would fall on rocks, forcing Ibrahim to return to Ghana to relaunch his career.

Larry Sumaila Ibrahim is a clever player. He has an exceptional engine, always ready to execute his duties efficiently and effectively. His runs are long, his movements are great, he’s brave, and he’s exceptionally humble. “I am really having a wonderful time here. They’ve [Hearts of Oak] given me the opportunity to bring my proclivity to bear. My almost five months stay with them has really benefited my development as a player as I have learnt a lot and hope to learn more as I progress.” Ibrahim chimed in.

Ibrahim plays as a right back, left back and as a wing back on either side of the flank and occasionally assigned a defensive midfield role to minimize the beatings meted to his teammates. Aggressive and surprisingly rugged for a player his age, his resolve is matched by his acute sensibility in defensive situations. His awareness of when to close down and strip the ball from opponents is impressive, as is his speed in covering ground to instigate his team’s pressing. He’s always searching for a forward pass to open up an opponent. He’s strong and good in the air, making him a capable all-rounder for his position. He excellently combines sound defending with forward raids. Ibrahim ticks all of the boxes.

Versatile and full of youthful verve, Ibrahim’s ascent shows no signs of slowing, with the 18-year-old having a lot to offer.  His reading of the game is so good that he can anticipate situations before they escalate. If he does get into danger, however, he can always rely on his long stride to get him out of trouble. Perhaps more importantly, he is a leader, the kind of player others look up to and improve upon their game to impress. With him in the side, his club officials will know that his teammates will perform because he wouldn’t have it otherwise. There are even hushed talks of him attracting several European clubs.

After the death of both of his parents, Ibrahim was placed at the head of the household and had to engage in menial jobs to support himself and his younger sister. It was a hard upbringing, one which required him to learn who he was from an early age.

“Life has not been easy for me,” he reflected. “I’ve suffered a lot. I’ve been there before. Now look at me, I might not be okay, but my life has changed.” He said in the same interview

As an eternal optimist, he would always assure his sister of turning the fortunes of the family around because he had the conviction of becoming a great footballer in the future. It is always a good thing to be convinced in your convictions. Isn’t it?

Having witnessed most of the Ghanaian top-flight games, Ibrahim is aware of the challenge ahead, but the confident teenager is optimistic of his success with the Phobians. “I am ready for the challenge ahead. I have the wherewithal to be successful here (Hearts of Oak).”

In an exclusive interview with Hannibal Football, Ibrahim insisted he is “100% committed” to the Hearts’ cause, but offered a prophecy that the club will be dreading: “One day I’ll leave to play in another league,” he admitted. “Lots of people think the Bundesliga, Eredivisie, and Ligue 1 will suit my style, but as a footballer I am ready for any challenge.” If as many clubs in Europe are keeping their tabs on the utility player as reports suggest, his words will offer encouraging signs. And given the 18-year-old’s supreme form, offers will likely be coming soon.

His temperament is outstanding; moreover, he plays with a maturity that belies his tender years. Improving all the time, with the right technical guidance and tutelage, Larry Sumaila Ibrahim could go on to become one of the world leading footballers and etch his name in football’s folklore. 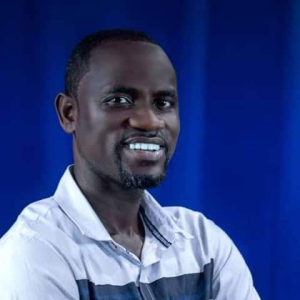 Godfred Budu is a purpose driven individual with a sharp eye for excellence. He's a graduate of the University for Development Studies, Ghana with a BA degree in Development Studies. He loves football and loves to write about it. He supports Accra Hearts of Oak and a sympathiser of Chelsea FC. He dreams of covering the AFCON and the FIFA world cup in the not too distant future